This article specifies the rule body information used in the address migration process. Users can customize their own migration rules according to their needs. 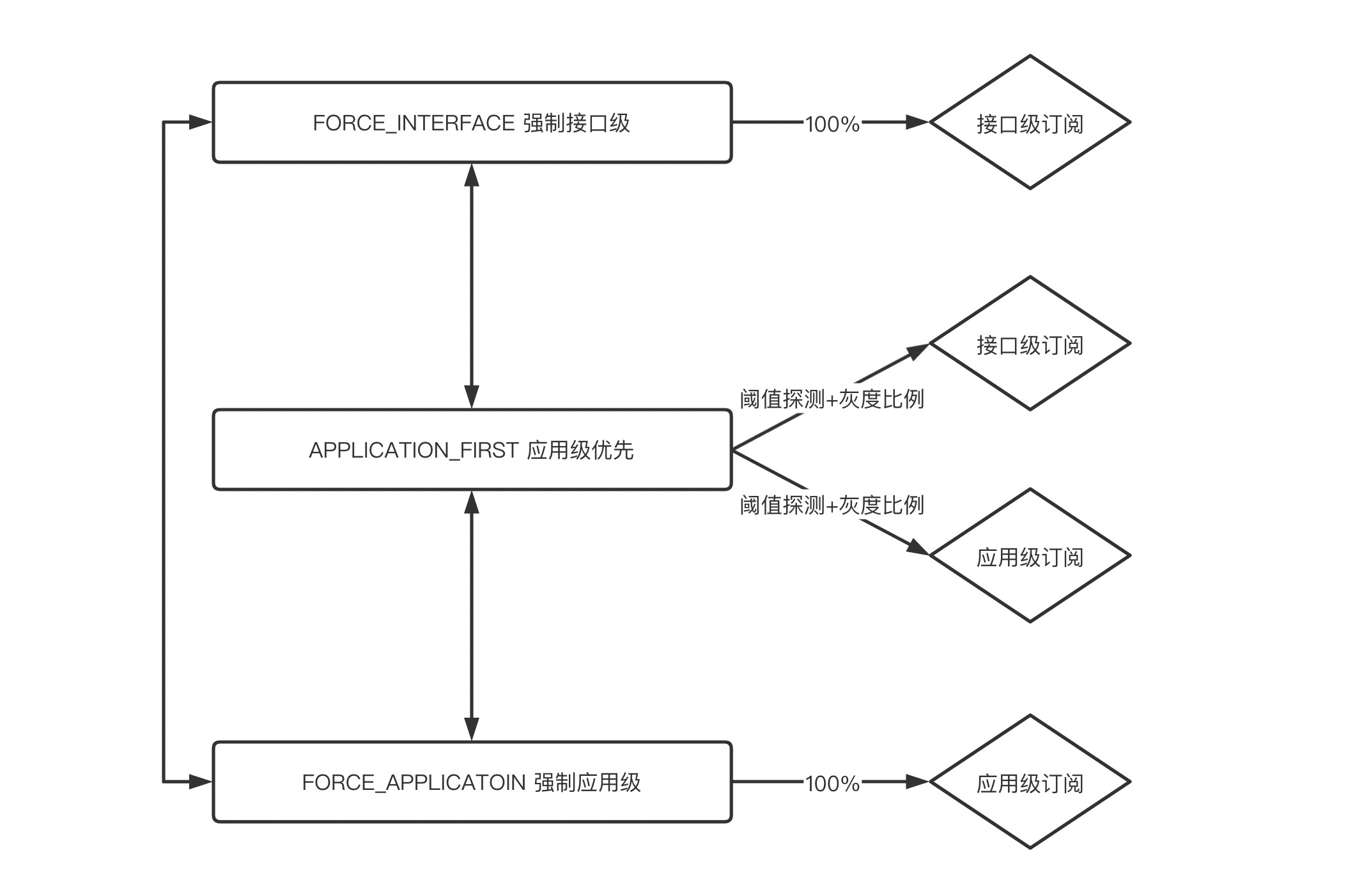 FORCE_INTERFACE: Only enable the registry logic for interface-level service discovery in compatibility mode, and 100% of the call traffic follows the original process APPLICATION_FIRST: Enable interface-level and application-level dual subscriptions, and dynamically determine the calling traffic direction according to the threshold and grayscale traffic ratio at runtime FORCE_APPLICATION: Only enable the registration center logic of application-level service discovery in the new mode, and 100% of the call traffic goes to the address of the application-level subscription

The rules are configured in yaml format, and the specific configuration is as follows:

The reference configuration example is as follows:

Refer to the previous section for the content of configuration items

When the program starts, it will pull this configuration as the highest priority startup item. When the configuration item is a startup item, no checking operation will be performed, and the final state will be reached directly according to the status information. When a new configuration item is received during the running of the program, the migration operation will be performed, and the configuration information will be checked during the process. If the check fails, it will be rolled back to the pre-migration state. Migration is performed at the interface granularity, that is, if an application has 10 interfaces, 8 of which migrate successfully and 2 fail, then in the final state, the 8 successfully migrated interfaces will execute the new behavior, and the 2 failed interfaces will still be old state. If it is necessary to re-trigger the migration, it can be achieved by re-delivering the rules.

The core code is as follows:

At the same time, MigrationAddressComparator is also an SPI extension point, users can expand it by themselves, and the results of all checks are intersected.

The flow chart is as follows: detection stage 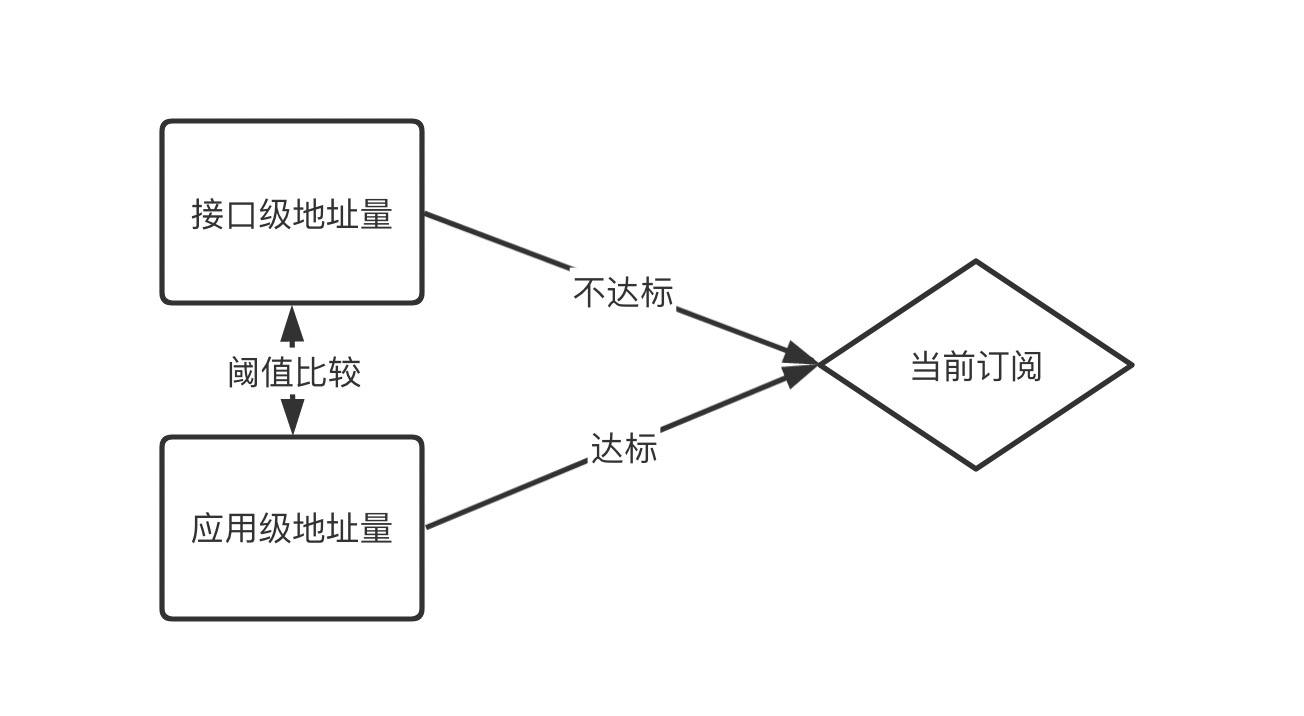 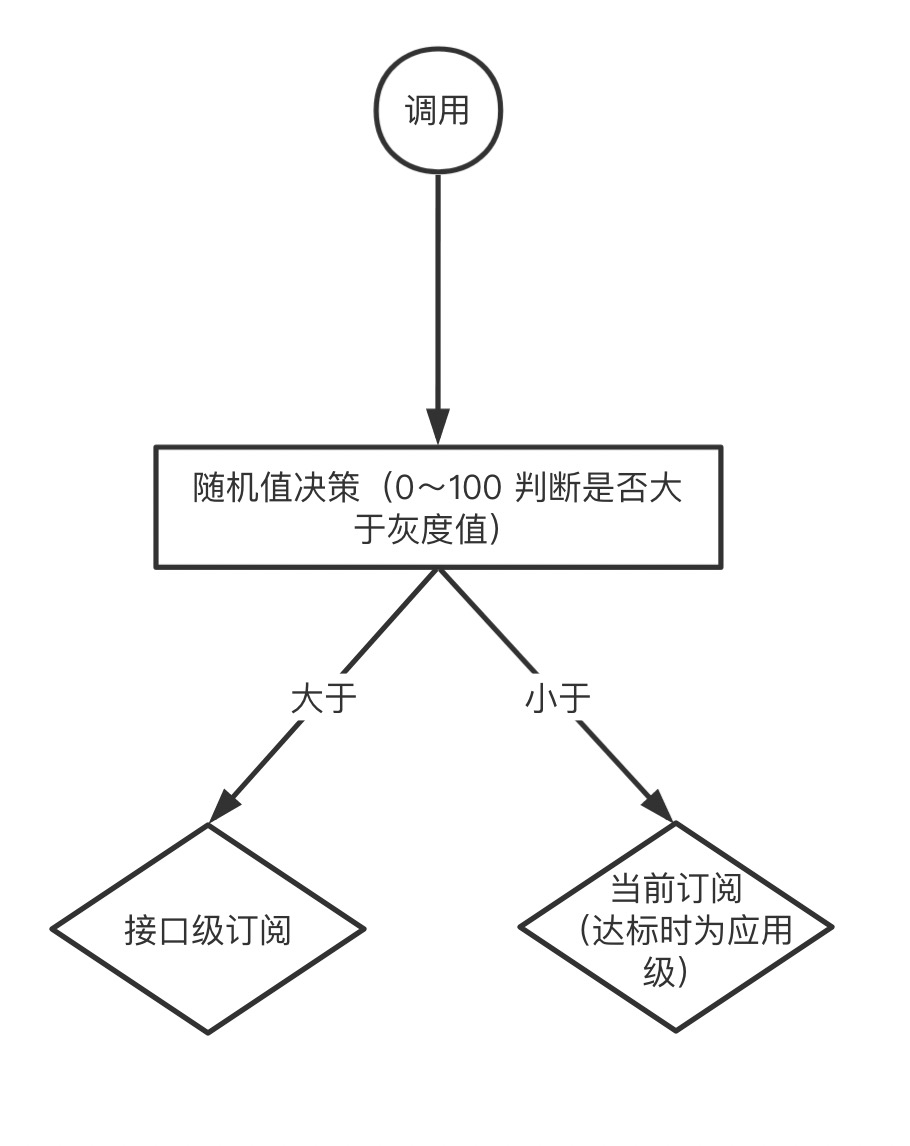 The core code is as follows:

Switching from mandatory interface level, mandatory application level to application level priority is essentially a process of switching from a single subscription to a dual subscription, retaining the original subscription and creating another subscription. In this switching mode, the delay configuration configured in the rule body will not take effect, that is, the threshold detection will be performed immediately after the subscription is created, and a decision will be made to select a certain group of subscriptions for the actual priority call. Since the application-level priority mode supports dynamic threshold detection at runtime, the threshold will be recalculated and switched after all addresses are notified for the scenario where some registry centers fail to start and obtain all addresses. Dynamic switching in the application-level priority mode is implemented based on the address listener of the service directory (Directory). 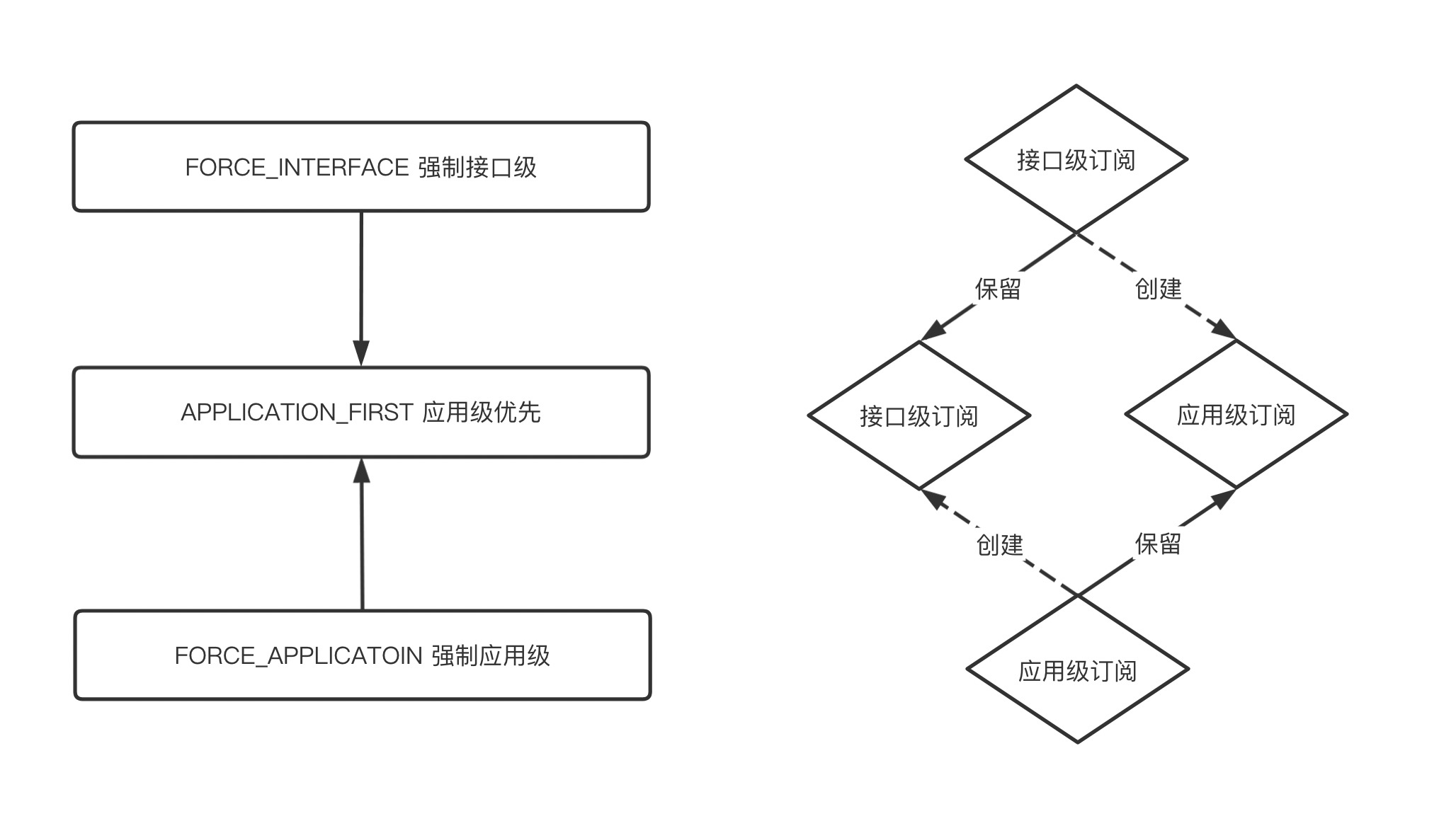 The process of switching from application-level priority to mandatory interface level and mandatory application level is to check the address of the double subscription. If it is satisfied, the other subscription will be destroyed. If it is not satisfied, the original application-level priority status will be rolled back. If the user wants the switching process to switch directly without checking, it can be realized by configuring the force parameter. 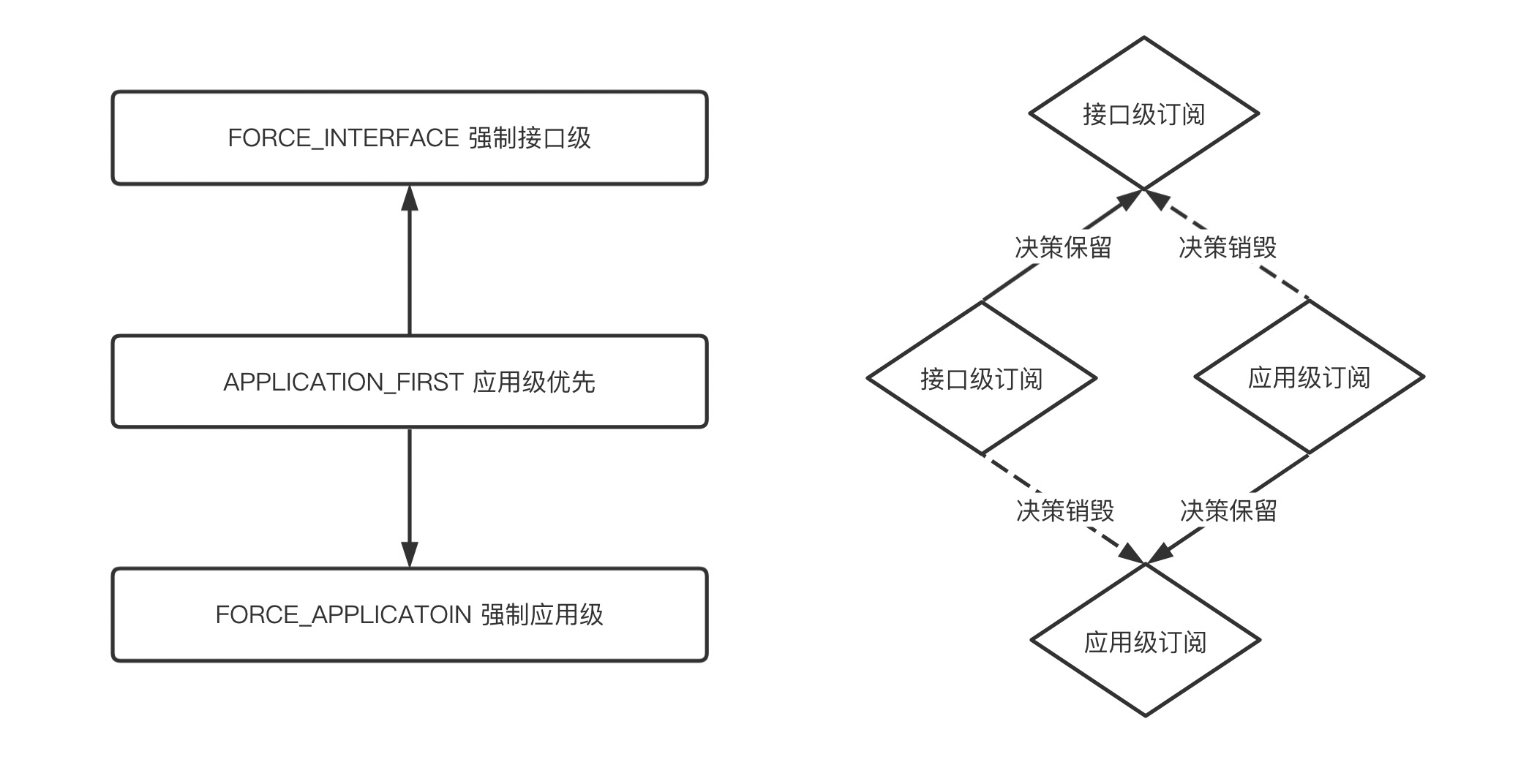 3. Mandatory interface level and mandatory application level switch between each other