Dubbo3 provides Triple (Dubbo3) and Dubbo2 protocols, which are native protocols of the Dubbo framework. In addition, Dubbo3 also integrates many third-party protocols and incorporates them into Dubbo’s programming and service governance system. Including gRPC, Thrift, JsonRPC, Hessian2, REST, etc. The following focuses on the Triple and Dubbo2 protocols.

The Triple protocol is the main protocol launched by Dubbo3. Triple means the third generation. Through the evolution of the Dubbo1.0/Dubbo2.0 two-generation protocol and the wave of technology standardization brought by cloud native, the new Dubbo3 protocol Triple came into being.

The protocol is the core of RPC, which regulates the content and format of data transmission in the network. In addition to the necessary request and response data, it usually contains additional control data, such as the serialization method of a single request, timeout period, compression method, and authentication information.

The content of the agreement consists of three parts

The design of the RPC protocol needs to consider the following:

Compared with the private RPC protocol directly built on the TCP transport layer, the remote call solution built on HTTP will have better versatility, such as WebServices or REST architecture, using HTTP + JSON can be said to be a de facto standard solution .

Choosing to build on top of HTTP has two biggest advantages:

But there are also obvious problems:

But there are also some problems

In the end, we chose to be compatible with gRPC and use HTTP2 as the transport layer to build a new protocol, which is Triple.

The rise of containerized applications and microservices has led to the development of techniques optimized for workload content. The traditional communication protocols (RESTFUL or other HTTP-based custom protocols) used in the client are difficult to meet the convenience requirements of the application in terms of performance, maintainability, scalability, and security. A cross-language, modular protocol will gradually become a new application development protocol standard. Since the gRPC protocol became a CNCF project in 2017, more and more infrastructure and businesses including k8s and etcd have begun to use the gRPC ecosystem. As a cloud-native microservice framework, Dubbo’s new protocol is also perfectly compatible with gRPC . Moreover, Triple will also enhance and supplement some imperfect parts of the gRPC protocol.

So, does the Triple protocol solve the series of problems we mentioned above? 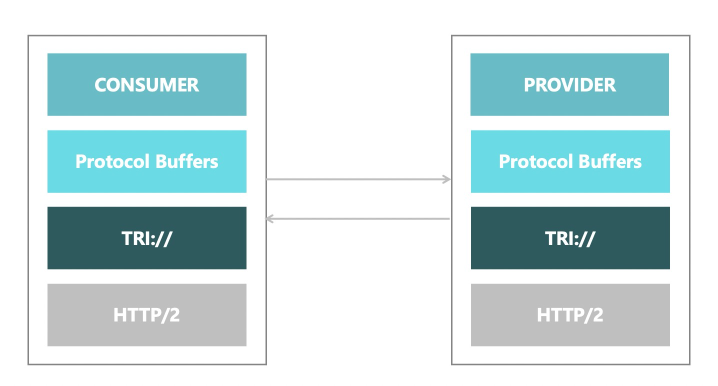 Further extension based on the grpc protocol

Among them, Service-Version and Service-Group respectively identify the version and group information of the Dubbo service, because the path of grpc declares the service name and method name, compared with the Dubbo protocol, it lacks version and group information; Tracing-ID, Tracing- RPC-ID is used for full-link tracking capabilities, which respectively represent tracing id and span id information; Cluster-Info represents cluster information, which can be used to build some flexible service management capabilities related to routing such as cluster division.

In some application scenarios such as large file transmission and live broadcast, the consumer or provider needs to transmit a large amount of data with the peer. Since the amount of data in these cases is very large, there is no way to transmit it in one RPC packet. Transmission, so for these data packets, we need to fragment the data packets and transmit them through multiple RPC calls. If we transmit these split RPC data packets in parallel, then the relevant data packets after reaching the peer end It is unordered, and the received data needs to be sorted and spliced, and the related logic will be very complicated. But if we serially transmit the split RPC packets, the corresponding network transmission RTT and data processing delay will be very large.

In order to solve the above problems, and to transmit a large amount of data between the consumer and the provider in a pipelined manner, the Streaming RPC model came into being.

Through the Streaming RPC method of the Triple protocol, multiple user-mode long connections, Stream, will be established between the consumer and the provider. Multiple Streams can exist on the same TCP connection at the same time, and each Stream is identified by a StreamId, and the data packets on a Stream will be read and written sequentially.

In the world of APIs, the most important trend is the rise of standardized technologies. The Triple protocol is the main protocol launched by Dubbo3. It adopts a layered design, and its data exchange format is developed based on the Protobuf (Protocol Buffers) protocol, which has excellent serialization/deserialization efficiency. Of course, it also supports multiple serialization methods and many development languages. In the transport layer protocol, Triple chose HTTP/2, which has greatly improved its transmission efficiency compared with HTTP/1.1. In addition, as a mature open standard, HTTP/2 has rich security and flow control capabilities, and has good interoperability. Triple can not only be used for server-side service calls, but also support the interaction between browsers, mobile apps, and IoT devices and back-end services. At the same time, the Triple protocol seamlessly supports all service management capabilities of Dubbo3.

Under the trend of Cloud Native, the interoperability requirements between cross-platform, cross-vendor, and cross-environment systems will inevitably give rise to RPC technology based on open standards, and gRPC conforms to the historical trend and has been more and more widely used. In the field of microservices, the proposal and implementation of the Triple protocol is a big step for Dubbo3 to move towards cloud-native microservices.

Identifies an event message or not, for example, heartbeat event. Set to 1 if this is an event.

Identifies serialization type: the value for fastjson is 6.