When the cluster call fails, the fault tolerance solution provided by Dubbo

When the cluster call fails, Dubbo provides a variety of fault tolerance schemes, and the default is failover retry. 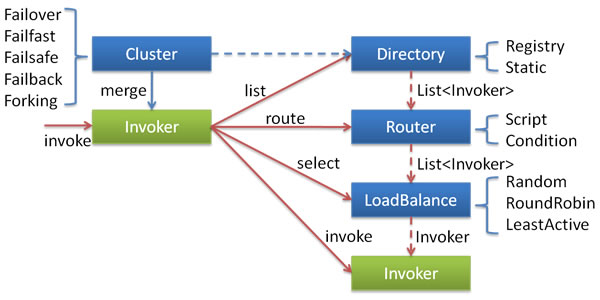 You can expand the cluster fault-tolerant strategy by yourself, see: Cluster Expansion

Automatic switching on failure, when a failure occurs, retry other servers. Usually used for read operations, but retries can introduce longer delays. The number of retries can be set by retries="2" (excluding the first time).

The number of retries is configured as follows:

Fail fast, only one call is made, and an error will be reported immediately if it fails. Usually used for non-idempotent write operations, such as adding new records.

Fail safe, when an exception occurs, just ignore it. Typically used for operations such as writing to audit logs.

The failure is automatically recovered, and the failed request is recorded in the background and resent at regular intervals. Typically used for message notification operations.

Call multiple servers in parallel, and return as long as one succeeds. It is usually used for read operations with high real-time requirements, but more service resources need to be wasted. The maximum parallelism can be set by forks="2".

Broadcast calls all providers one by one, and if any one reports an error, it will report an error. Usually used to notify all providers to update local resource information such as cache or logs.

broadcast.fail.percent=20 means that when 20% of the nodes fail to call, an exception will be thrown, and no other nodes will be called.

In the scenario of multi-registry subscription, load balancing between registry clusters. There are four strategies for address selection between multiple registries: