dubbo RPC is the core high-performance, high-throughput remote call method in the dubbo system. I like to call it a multiplexed TCP long connection call. Simply put:

Serialization also plays a vital role in the response speed, throughput, and network bandwidth consumption of remote calls, and is one of the most critical factors for us to improve the performance of distributed systems.

In dubbo RPC, multiple serialization methods are supported at the same time, for example:

In recent years, various new efficient serialization methods have emerged one after another, constantly refreshing the upper limit of serialization performance, the most typical ones include:

The performance of most of these serialization methods is significantly better than hessian2 (even including the immature dubbo serialization).

In view of this, we introduce two efficient Java serialization implementations, Kryo and FST, for dubbo to gradually replace hessian2.

In production-oriented applications, I recommend Kryo as the preferred choice for now.

Then add an attribute in the XML configuration of dubbo RPC:

Register the class to be serialized

To make Kryo and FST fully perform with high performance, it is best to register those classes that need to be serialized in the dubbo system. For example, we can implement the following callback interface:

Then add in XML configuration:

After registering these classes, serialization performance may be greatly improved, especially for small numbers of nested objects.

Of course, when serializing a class, many classes may be cascaded, such as Java collection classes. In response to this situation, we have automatically registered common classes in the JDK, so you don’t need to register them repeatedly (of course, there is no effect if you register repeatedly), including:

Since registering classes to be serialized is only for performance optimization purposes, it doesn’t matter if you forget to register some classes. In fact, even without registering any classes, the performance of Kryo and FST is generally better than that of hessian and dubbo serialization.

Of course, someone may ask why not use configuration files to register these classes? This is because there are often a large number of classes to be registered, resulting in lengthy configuration files; and without good IDE support, writing and refactoring configuration files are much more troublesome than java classes; finally, these registered classes are generally It is not necessary to make dynamic modifications after the project is compiled and packaged.

In addition, some people will also think that manually registering the serialized class is a relatively cumbersome work, can it be marked with annotation, and then the system will automatically discover and register. But the limitation of annotation here is that it can only be used to mark classes that you can modify, and many classes referenced in serialization are likely to be things that you cannot modify (such as third-party libraries or JDK system classes or classes of other projects ). In addition, adding annotation after all slightly “polluted” the code, making the application code a little bit more dependent on the framework.

In addition to annotation, we can also consider other ways to automatically register serialized classes, such as scanning the class path, automatically discovering classes that implement the Serializable interface (even including Externalizable) and registering them. Of course, we know that there may be a lot of Serializable classes on the classpath, so we can also consider using package prefixes to limit the scanning range to a certain extent.

Of course, in the automatic registration mechanism, it is especially necessary to consider how to ensure that both the service provider and the consumer register classes in the same order (or ID) to avoid misalignment. After all, the number of classes that can be discovered and registered at both ends may be the same. are different.

No parameter constructor and Serializable interface

In addition, Kryo and FST do not require the serialized class to implement the Serializable interface, but we still recommend that every serialized class implement it, because this can maintain compatibility with Java serialization and dubbo serialization. In addition It also makes it possible for us to adopt some of the above automatic registration mechanisms in the future.

In this article, we mainly discuss serialization, but when doing performance analysis and testing, we do not deal with each serialization method separately, but put them in dubbo RPC for comparison, because this is more realistic.

Of course, the test environment is limited, so the current test results may not be very authoritative and representative.

Keeping close to dubbo’s own benchmarks:

Run a 5-minute performance test. (Quoting dubbo’s own test considerations: “It mainly examines the performance of serialization and network IO, so the server does not have any business logic. The reason for taking 10 concurrency is to consider that the rpc protocol may have a high CPU usage rate under high concurrency. to the bottleneck.”)

The size of the number of bytes generated by serialization is a relatively deterministic indicator, which determines the network transmission time and bandwidth occupation of the remote call.

The results for complex objects are as follows (lower numbers are better): 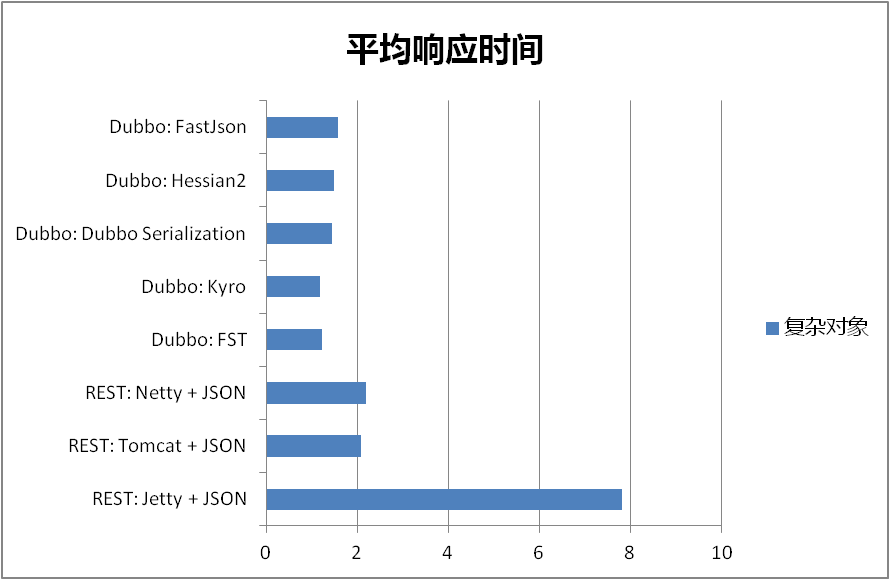 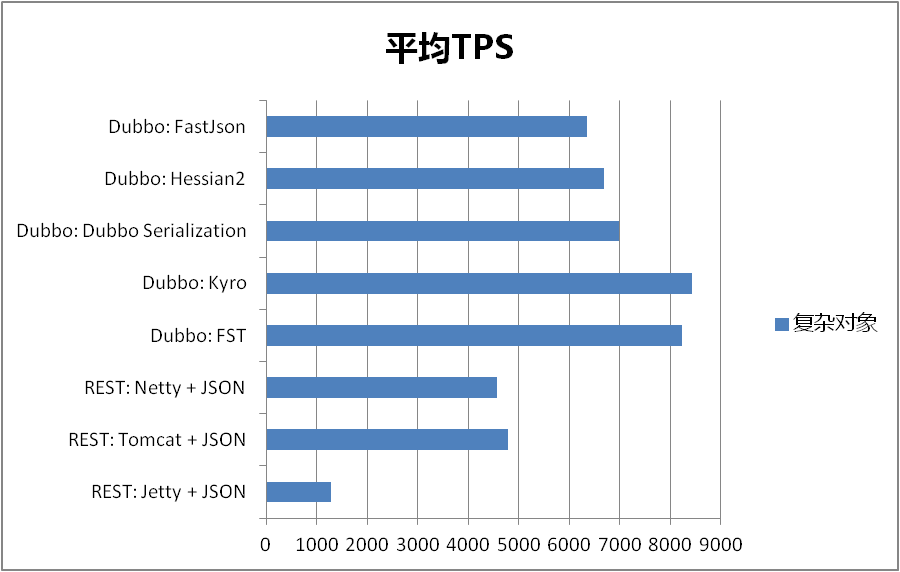 As far as the current results are concerned, we can see that Kryo and FST have significantly improved compared to the original serialization method in Dubbo RPC, regardless of the size of generated bytes, average response time and average TPS.

In the future, when Kryo or FST is mature enough in dubbo, we will probably change the default serialization of dubbo RPC from hessian2 to one of them.