With the promotion of service, the website of Dubbo service framework requirements gradually increase, Dubbo existing developers can implement demand is limited, many requirements have been delay, and site classmates also want to participate, combined with field, so the platform will be open to internal part of the project, let everyone together to implement, Dubbo as one of the pilot project.

Now that want to open it, about to take some extension point Dubbo, let participants black box extend as far as possible, rather than a white box to modify the code, or branch, quality, merger, the conflict will be hard to manage.

There though some extension interface, but not very good collaboration, and loading and configuration of extension points are not unified handling, so face it under the refactoring.

Step 1, the core plug-in, equal treatment to the third party

Now that want to expand, extension point loading mode, the first thing to unification, micro core + plug-in, can achieve the principle of OCP is train of thought.

Made up of a plugin lifecycle management container, core, core does not include any functions, this will ensure that all functions can be replaced, and framework, the authors can achieve the function of the extension must also can do it, so as to guarantee the equal treatment to a third party, so, the function of the framework itself also want to use the plug-in way, cannot have any hard coded.

Micro core usually adopt the Factory, the IoC, the OSGi plugin lifecycle management.Consider the applicable Dubbo, strong don’t want to rely on the Spring IoC container.The IoC container that you made a small also feel a little too much design, so intend to use the most simple way of Factory management plug-in.

All plug-in and agreed, must be marked with: @ the Extension (" name “), as the identity of the name, after loading is used to configure option.

Step 2 each extension point encapsulate a change factor, only to maximize reuse

Each extension point implementers, usually only care about one thing, now the extension points, is not entirely separate.Such as: Failover, the Route, LoadBalance, Directory not completely separate, all written by RoutingInvokerGroup died.

After break up, the design is as follows:

Now a lot of logic, are placed in the base class implementation, then by the method of template back to the realization of the tone categories, including: local, mock, generic, echo, token, accesslog, monitor, count, limit, etc., can use the Filter to realize all split, each function is called a ring on the chain.Such as: (the base class template method)

Keep the concept of as little as possible, help to understand, for open systems is particularly important.In addition, the interface can use a consistent conceptual model, can guide each other, and reduce the model transformation,

The Exporter method signature as follows:

But they are the same, only is a on the client side, one on the server side, different model classes are applied.

For example, the existing: Invoker, Exporter, InvocationHandler, FilterChainAre actually invoke behavior at different stages, can abstract away completely, unified for the Invoker, reduce the concept.

Generalization expansion refers to: the extension point gradually abstraction, take all functions, sets and new function is always set in and expand the function of the old concept.

Combined extension refers to: the extension points orthogonal decomposition, all functions of overlap, new function is always based on the old function implementation.

The above design, unconsciously will Dubbo existing function as the core functionality.Above contains the concept of Dubbo existing RPC all functions, including: the Proxy, the Router, Failover, LoadBalance, Subscriber, Publisher, Invoker, Exporter, Filter, etc., But these are the core?RPC can Run, kicked off what?And what is not kick off?Based on this consideration, the RPC can be broken down into two levels, Protocol and Invoker is the core of RPC.Other, including the Router, Failover, Loadbalance, Subscriber, the Publisher is the core, but the Routing.Therefore, the Routing as an extension of the Rpc core, design is as follows:

After finishing, the design is as follows: 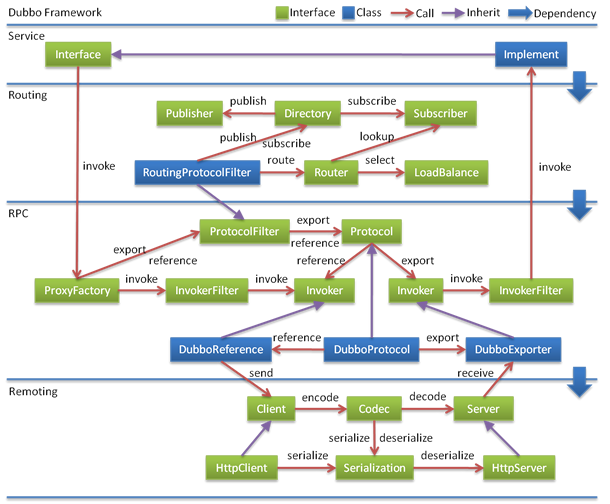