Dubbo design is now completely unobtrusive, namely the user only depends on the configuration of contract.After multiple versions of the development, in order to meet the demand of various scenarios, configuration is more and more.In order to maintain compatibility with only grow, lurking inside all sorts of styles, convention, rules.The new version will also be configured for a adjustment, remove the dubbo, properties, instead of all the spring configuration.Will think of some written in this memo.

First of all, the purpose is to have a variety of configuration, which can be roughly divided into:

Another extension configuration, which may be different.If only policy interface implementation class to replace, can consider the properties of the structure.If there is a complex life cycle management, may need to configure such as XML.Sometimes extended by registering interface provided.

And to describe the configuration, because want to participate in the business logic, usually embedded into the application of life cycle management.There are more and more using spring projects, directly using the spring configuration is common, and spring permits custom schema, configuration simplified is very convenient.Also has its disadvantages, of course, is strongly dependent on the spring, can ask programming interface to do the matching scheme

Extension configuration, usually to the configuration of aggregate demand is higher.Because the product need to find the third party implementation, add it to the product inside.Agreed in the Java world, usually in a specified file each jar package down load, such as: the eclipse plugin. The XML, struts 2 struts - plugin. XML, and so on, this kind of configuration can consider Java standard service discovery mechanisms, namely in the jar meta-inf/services placed under the interface class name file, content is an implementation class name of the class in a row, like encryption algorithm in the JDK extension, the script engine extension, new JDBC driver, etc., are all in this way.see：ServiceProvider Provider。

Dubbo old version under each jar package through agreement, place called Dubbo - context. The spring configuration XML extensions and integration, the new version to use the JDK’s own meta-inf/services, spring from too much dependence.

Configuration is always implied some style or hidden rules, should as far as possible to keep its consistency.For example: a lot of functions have switch, and then have a configuration value：

No matter which way, all the configuration items, should keep the same style, Dubbo selected is the second.Also, similar to that of timeout, retry time, timer interval.If a unit is second, another unit is milliseconds (C3P0 configuration item is) so, staff will be crazy.

Provide configuration, want to consider developers, testers, piping, the system administrator.Testers can’t modify the code, and test environment is likely to be more complex, need to have some set aside for testers “back door”, can be modified in the peripheral configuration items.Like spring is accomplished configuration, support SYSTEM_PROPERTIES_MODE_OVERRIDE, can through the JVM -d parameters, or like hosts agreed a cover configuration files, on the outside of the program, modify some configuration, easy to test.

Configuration is also “duplicate code”, there is also a “generalization and elaboration” problem.Such as: Dubbo timeout Settings, each service, and each method, should be can set the timeout.But a lot of service don’t care about overtime, if required each method configuration, it is not realistic.So Dubbo adopted method inherit service timeout, overtime service timeout to inherit the default timeout, no configuration, opens up search. 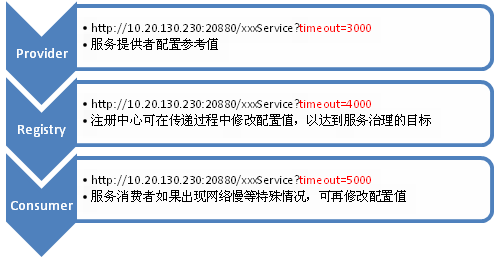 Forwards compatibility is very good, as long as you guarantee configuration only grow, basically can guarantee forwards compatibility.But backward compatibility, but also should pay attention to, to prepare for subsequent to join the new configuration items.If a special configuration in configuration, you should make an appointment a compatibility for the “special” case rules, because the special case, probably will happen later.For example, have a configuration file is save “service = address mapping”, one of the special line, is saved “registry = address”.Now application load time to define “registry” the Key is special, do special processing, the other is “service”.New version found, however, to add a “monitoring center” = address, at this point, the old version of the program will handle “monitoring center” as a “service”, because the old code can’t be change, compatibility is will be very troublesome.If previously agreed upon in the “special” logo + XXX for special treatment, follow-up will be more convenient.